Notes From a Recent Workshop With Pauline Oliveros 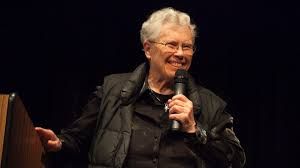 Composer / accordionist / pioneer of electronic music / teacher / music visionary Pauline Oliveros passed away the Friday after Thanksgiving, at the age of 84. In September 2016 - just a few months ago - Pauline Oliveros conducted a workshop at the Karl Berger Creative Music Studio in Big Indian, N.Y., and I was one of the 20 or 25 participants. She was sharp and funny, and she had a fully booked schedule of teaching and performances.

We participants had already spent one evening at the CMS. Next morning, we had breakfast and done the morning bodywork and rhythm and voice exercises. We had been there for almost 24 hours, and we had still not touched our instruments! But we were all in tune and very eager to play. In fact, we may have been too eager, but it was all right. We were gathered in a fine, big barn that had been converted into a high-ceilinged music studio. Here are some notes from that workshop:

She was to lead us in a session of "deep listening" - a term and a musical approach that she invented. Do you think you are listening deeply to the sounds around you? Maybe you could listen deeper, and even deeper than that.

Oliveros said that she had recently performed in London and had not played or practiced in four months. She said, "I already practiced." When that comment was met with silence, she added, "That's a joke." She said that when she went to play the piece on the digital accordion, the piece played itself.

We were all sitting in a circle. First thing, we went around the room and spoke our first names the way we like to hear them. Then we did it again, and each time someone spoke his or her name, the group repeated each name, in an intonation as similar as possible.

Then a listening exercise. She said she would strike a little chime, and we should listen to the sound disappear and then just listen for the ambient sounds in the barn.

*Chime.* The sound fluttered away with a chirp. Hear the sounds of the wooden rafters "checking." The midday sun was climbing, and the tin roof was expanding, and the wooden rafters gave out pops and creaks. Hear the late-summer insects outdoors. Someone is walking around outside - maybe one of the resort staff. I had my eyes closed, and I went into a mental state that was halfway to sleep, or maybe more than halfway. Although I was not fully asleep, I was dreaming that I had my checkbook and was writing checks and watching them fly away. I was in some far-off place, writing checks, when the chime sounded again. This time the sound did not flutter or chirp but stayed constant.

Pauline had us go into teams of three to to discuss what had happened, then one person from each team reported to the group. After each team had reported, she said that musicians often like to identify the sounds they hear.

During a break, she said that she had recently done some work in Norway, with a university and a private company that were developing musical instruments for the deaf. One such instrument involved loudspeakers mounted under a board, and the performer stands on the board. She said she composed music for an event that featured "hearing and non-hearing performers."

After lunch, back to the barn, and back to the workshop. We did a vocal exercise, starting with three breaths, then a tone. Join and and do one of two things: Either sing the same tone as someone else, as accurately as you can, really zero in on it, or else sing a note that no one else is singing. We did this for a few minutes -- she did not specify how long we were to do it -- until we came to a natural stop. She said, "That was kind of timid." She said we should make ourselves heard so that someone else can hear us and respond in some way. We tried it again, a little bolder. As for how and when to end, she said she doesn't specify endings -- sometimes everyone ends together, and sometimes someone wants to keep going.

Finally, instruments. We all took our places at our instruments -- several flutes and other woodwinds, three electric guitars, two or three percussionists, two upright bass players, one trumpet, two or three vocalists, four electronic keyboards (including yours truly) and a few others. We went around the room, each person playing a short phrase. Then we went around the room in duets -- we counted off, and then No. 1 plays with No. 11, No. 2 plays with No. 12, and so on. So it was myself and one of the flautists for five or ten seconds. Then again in trios, groups of three, and the first person drops out, then the fourth person enters. Then the second person drops out and the fifth person enters, and so on.

Then a group improvisation. She read the instructions of a "test" piece she had composed. We were to listen to the ambient sounds in the room and reinforce them with our instruments. Not imitate but reinforce. And we could reinforce sounds that other musicians were making.

Someone asked us how long we should play. She smiled and said, "Everyone always asks about duration."

Finally we all got to really play something, and we were all maybe a little too ready to wail, because we all tended to play a lot. In the corner a fan was softly whirring, and I used the organ patch on my Nord Electro 2 to make a low *whoosh* that would reinforce the white noise from the fan. We had 22 people making sounds for about 12 or 15 minutes, and it sounded pretty cool, but while we were playing I began to suspect that we were losing the point of the exercise. When we ended, she asked us to discuss what had happened.

A few people said, and she agreed, that we were reinforcing each other and not the ambient sounds. She said we left very little space for the ambient sounds, and instead our own sounds dominated. She said, "I heard some good playing, but I didn't hear a lot of reinforcement."

Someone said this exercise was challenging and said that if we had another chance to do this exercise, we would do it better. Pauline said, "Yes, it's challenging. What kind of workshop leader would I be if I didn't challenge you?"

That's all I have for notes.

That evening, in the workshop "roadhouse" across the highway, there was a performance of a trio of Pauline Oliveros on digital sampling Roland accordion, Ingrid Setso on poetry and vocals, and Iva Bittova on vocals and violin.